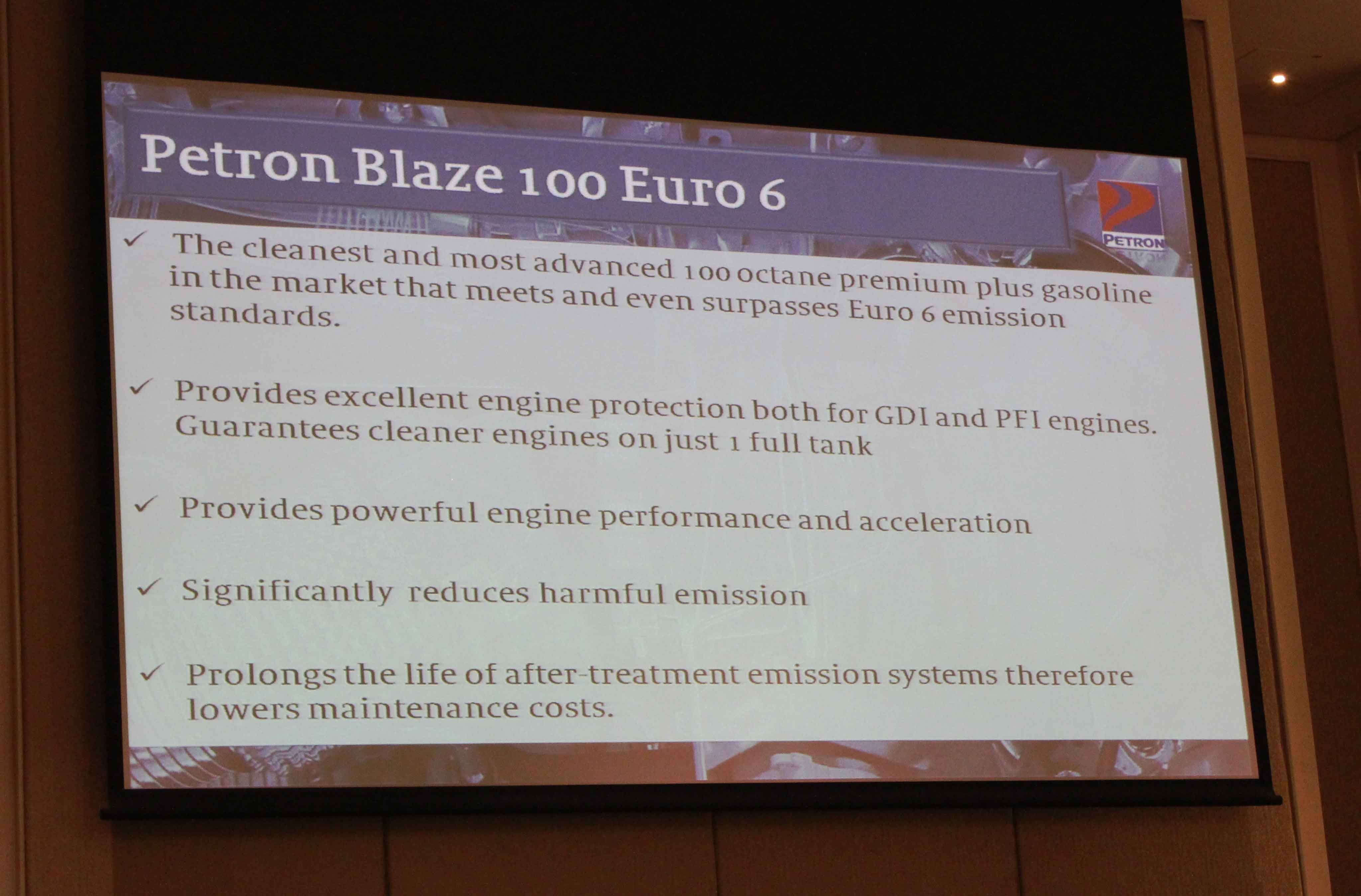 Market Leader Petron launched on March 28 the cleanest and most advanced gasoline in the Philippine market.

Motoring media are excited for the latest developments in Petron's fuel technology.

Market leader Petron Corporation now has the cleanest and most advanced gasoline in the Philippine market that even surpasses Euro 6 standards, the most stringent fuel technology and emission benchmark in the world today.

Tests showed Blaze 100 Euro 6 contains less than 3 ppm (parts per million) sulfur, compared to the Euro 6 standard of 10 ppm maximum. Euro 4 fuels, which is the mandated standard in the country, contains up to 50 ppm. Blaze 100 Euro 6 is available in nearly 300 Petron service stations nationwide.

The Euro 6 standard is the most stringent global emission standard. To qualify, fuel should have significantly reduced particle numbers, particulate matter, carbon monoxide, nitrogen oxides, and hydrocarbons in vehicle emissions. Particle number (PN) is the additional
criterion that separates Euro 5 and Euro 6 fuel standards. Blaze 100 Euro 6 passed the PN tests with flying colors as it was three times cleaner than the limit.

“We are proud that Blaze 100 Euro 6 meets the world’s best environmental and fuel technology standards. With the highest octane rating but the lowest sulfur content, it is the best gasoline in the market by far in terms of power, efficiency, engine protection, and reduced
emissions,” Petron President & CEO Ramon S. Ang said.

Samples of Blaze 100 Euro 6 were taken from Petron’s Bataan refinery and randomly from its stations by SGS, the world’s leading inspection, verification, testing, and certification company. The samples were then sent to SGS laboratories in the United Kingdom, Singapore and the Philippines. All samples tested met specifications (EN 228:2012) for Euro 6-technology vehicles.

Petron also sent samples of this innovative product to ISP The Testing Institute – a leading engine and vehicle testing laboratory for fuels and lubricants development. ISP conducted a Gasoline Direct Injection (GDI) test with Blaze 100 Euro 6 and found it did not cause carbon deposits in GDI engines. GDI is a more advanced engine technology that addresses fuel economy and emissions. It is being used in newer European, American, and Asian car models.

“Since our fuels are locally-produced and formulated in our refinery, we can guarantee the quality and consistency of Petron fuels,” Mr. Ang added.

“We will continue to innovate and lead in fuels technology so we can put more savings in our customers’ pockets while improving air quality across the nation,” he concluded.